The Synod Protocol and Acceptors

In the Synod protocol, there is an unbounded collection of $ballots$. Ballots are the key to liveness properties in Paxos. Each ballot has a unique $leader$. A leader can be working on arbitrarily many ballots, although it will be predominantly working on one at a time. A leader process has a unique identifier called the $leader$ $identifier$. Each ballot has a unique identifier, called its $ballot$ $number$. Ballot numbers are totally ordered, that is, for any two different ballot numbers, one is before or after the other. Do not confuse ballot numbers and slot numbers; they are orthogonal concepts. One ballot can be used to decide multiple slots, and one slot may be targeted by multiple ballots.

During the Synod protocol leaders send messages to acceptors, so one can think of acceptors as servers, and leaders as their clients. Acceptors maintain the fault tolerant memory of Paxos, preventing conflicting decisions from being made. Acceptors use a voting protocol, allowing a unanimous majority of acceptors to decide without needing input from the remaining acceptors. Thus, in order to tolerate $f$ crash failures, Paxos needs at least $2f + 1$ acceptors, always leaving at least $f + 1$ acceptors to maintain the fault tolerant memory. Keep in mind that acceptors are not replicas of one another, because they get different sequences of input from leaders.

The figure below illustrates the communication patterns between the various types of processes in a setting where $f = 2$.

An acceptor is quite simple, as it is passive and only sends messages in response to requests. Its state consists of two variables. Let a $pvalue$ be a triple consisting of a ballot number, a slot number, and a command. If $\alpha$ is the identifier of an acceptor, then the acceptor's state is described by

Knowing these invariants is an invaluable help to understanding the Synod protocol:

It is important to realize that Invariant A5 works in two ways. In one way, if all acceptors in a majority have accepted a particular pvalue $\langle b, s, c \rangle$, then any pvalue for a later ballot will contain the same command $c$ for slot $s$. In the other way, suppose some acceptor accepts $\langle b', s, c' \rangle$. At a later time, if any majority of acceptors accepts pvalue $\langle b, s, c \rangle$ on an earlier ballot $b < b'$, then $c = c'$.

Below you can find the pseudo-code for an Acceptor:

The Acceptor runs in an infinite loop, receiving two kinds of request messages from leaders (note the use of pattern matching):

It is easy to see that the code enforces Invariants A1, A2, and A3. For checking the remaining two invariants, which involve multiple acceptors, we have to study what a leader does first, which is described in the following subsections. 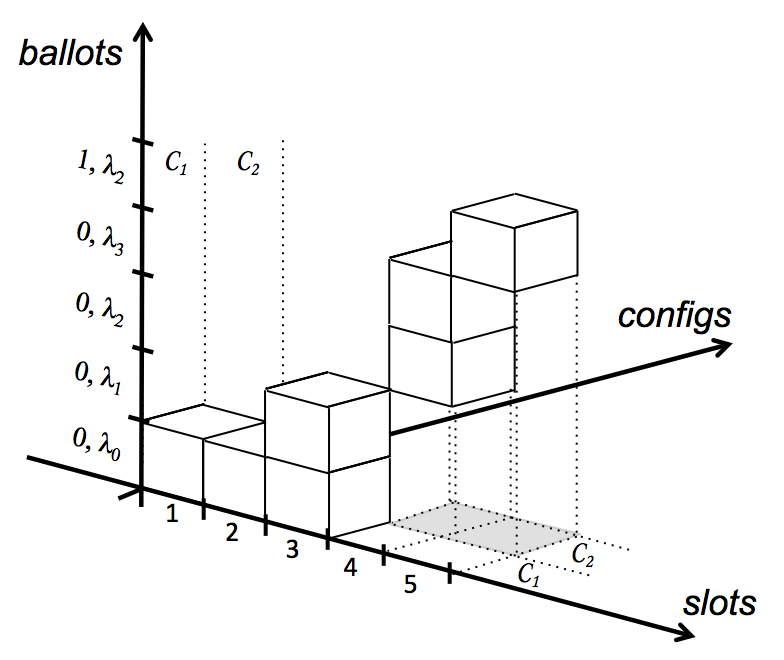 According to Invariant A4, there can be at most one proposed command per ballot number and slot number. The leader of a ballot is responsible for selecting a command for each slot, in such a way that selected commands cannot conflict with decisions on other ballots (Invariant A5).